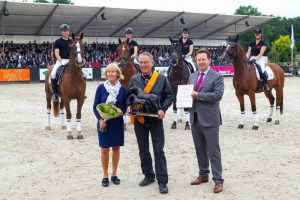 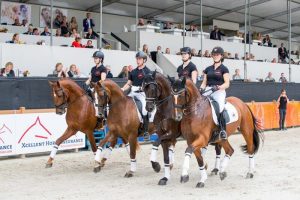 Please explain this most recent family affair? Let’s start with Louisville. I noticed this big brown stallion by Burggraaf out of Wenda (Vesins xx) at his breeder, Jack Wouters’ place. I went for one week to Louisville with a group of farriers and just couldn’t forget him. When I returned home, I bought him, called him Louisville, after the venue of the farriers’ meeting, and started to break him in. He was a bit, what we say in Dutch, ‘ril’ at the start, sensitive at his body, shivery when you touched him. I planned to sell him, but sometimes you have to count your blessings. No serious buyers passsed by. So I kept him and trained him to international Grand Prix instead. In 2004 Louisville and I became Dutch indoor GP masters. He had the right mentality and go so I used him for breeding as well. Louisville covered Rubiquil daughter Parmanda, the daughter of our first mare Amanda. The result was Glowmanda. As a four-year-old Glowmanda produced a son by Capri Sonne Jr (Rhodium – Wendela ster x San Remo, bred by R. van Steijn). We called him Jim Beam. He is our new star and hopefully will be an approved stallion. I’m really fond of Capri Sonne Jr as I’ve know him from being educated here with Dinja van Liere before he was sold to the Bechtolsheimer family in the UK. In his offspring Capri Sonne gives a nice front and a good canter, adding that to the qualities of the mare. The offspring are look-a-likes of the mare and that’s why he fits so well with my mares. Q We’ve mentioned Double Dutch. Why do you say he’s beyond what you wished for? I’m very proud of him. In May 2017 Double Dutch (Johnson) was acknowledged by the KWPN. As I said, this chestnut stallion was born in 2008 out of the mare Ushimanda. He was bred by my son Laurens van Lieren, and now we own him together. Double Dutch is really an exemplary horse for the Hexagon philosophy in breeding horses for top sport. He is very athletic, with his sire Johnson (Jazz) originating from the famous Reina mare line. He combines this bloodline with his interior, a golden heart, and an exemplary eagerness to work. Thamar Zweistra trains and competes him in Grand Prix. His workwillingness is beyond imagination. Q So, the stallions Hexagon’s Kyrain, Hexagon’s Rubiquil and Hexagon’s Louisville are the horses that have defined Hexagon Stables? Yes, they really are. Their progeny say enough. In 2004 Louisville was sold to American Karin Offield, who also did some very nice Grand Prix work with him. Offield decided to send him home to spend his life after sport with us. He was still a big friendly giant and took care of more progeny before he died in July 2016 at the age of 23. He is sadly missed by everyone in our stables, because of his charm, intelligent behaviour and friendliness. From the Louisville-Rubiquil combination we had several Grand Prix horses in our stables. The best known are Hexagon’s Welnetta, GP with Laurens van Lieren, and Hexagon’s Zodinde, GP with Thamar Zweistra. Q You have a lot of special horses in your stable and could write a book with all their stories, but let’s return to where Hexagon started – a figure with six sides? Yes, the six sides of the hexagon are the six elements of my stable: breeding, teaching, training, farriery, stabling, and stallion stud. Each one influences the other and that makes it vivid, very practical and united. I still am the farrier of all my own horses. Feet, I remember them and look at the feet very often. It’s too important to neglect! Although I would like to add that you should never neglect the interiors of horses. This year I bought three mares to use for carrying embryos from one of my top Grand Prix mares. Two I immediately got rid off because I could’t accept their behaviour. Just like I am not in favour of stallions that are screaming all the time. I dislike horses that are not able to stand still and to wait. It’s not my cup of tea.
Q Lets finish then by concentrating on your philosophy and future direction? My future is quite simple: I’ll just continue with the same vision to breed, train and compete top dressage horses. Good movers, energetic, reliable, work-willing. I have everything I need for that at home, so I’m a happy man. The future for breeding top dressage horses is having GP results with them, and only to breed with pedigrees building on GP results. And that’s just what I’ve been doing for decades!